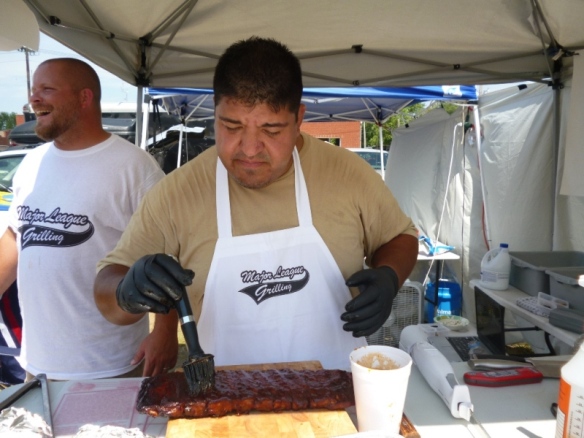 All of sudden, Major League Grilling BBQ Team is not the ‘newbie’ anymore when it comes to competing with the big boys. Apparently, we are the Big Boy’s!!!

After competing in 2 KCBS events with respectable finishes, word has spread about us and our BBQ skills. This time, we arrive in Wellsville, MO for the 5th Annual BBQ Cookoff. Here is the place to prove if you belong with so many top teams showing up at this contest; Quau, Pork Barrel BBQ, Ponderosa BBQ (Big Moe Cason of the TV show ‘Pitmasters’) are just a few of best cooks in the world here to compete. 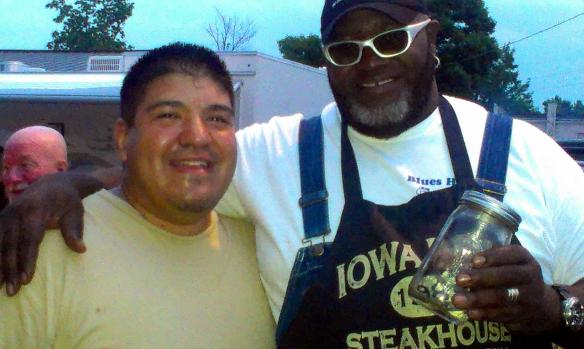 Me and Big Moe Cason

MLG did more than hold our own, we scored higher than most of them with taking 13th overall out of 39 teams. Even more, we were less than 0.5 points from 8th place (as I type this with clinched teeth). That margin would have been enough to score our first top ten call at a KCBS event. It goes to show…every point counts in appearance, taste and tenderness. 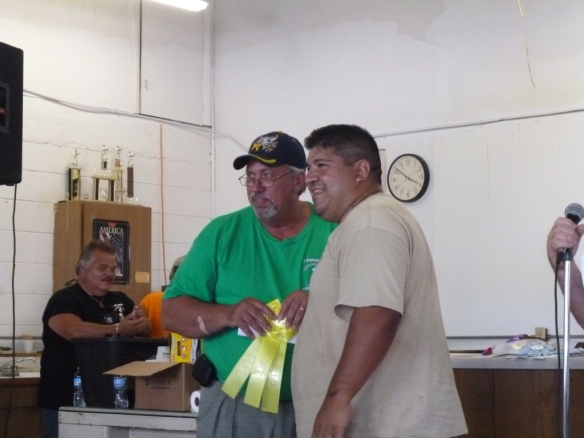 Our first trek taking the boys with us and we run into thunderstorms and gusty winds in Wellsville. The weather sets us back as the wife and kids take shelter in the Subaru. Meanwhile I try to hold down the canopy despite be weighted down with buckets of concrete blocks…off to a typical start, it can only be a good sign. 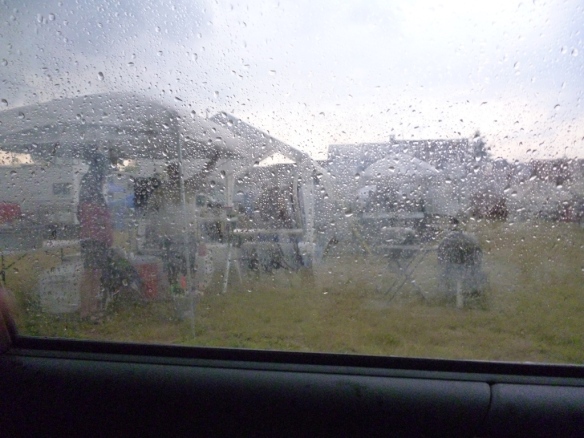 Jamie and I holding on to the weighted down canopy

Al and the Bowman family arrive just as the weather calms. Immediately, we set up our site and start prepping the meats. Afterwards, we took time to make our rounds to visit friends. Jeff Rippelmeyer and his daughter were out here cooking together, as a Father’s Day gift…really cool.

Later, a bell rings nearby to signify a special occasion, the cooks toast. This is where camaraderie supersedes everything else in competition BBQ. We shake hands, embrace close friends, take pictures and swap jars of moonshine, all for the love of gathering to compete with old friends and making new ones.

Bringing the kids are a lot of work. There’s not much for them to do while we’re all working and they got to make a potty trip every 15 minutes! Already, we’re at a disadvantage. On the other hand and more importantly, all the kids were in a great mood and had a great time.  Which made this events the most enjoyable. 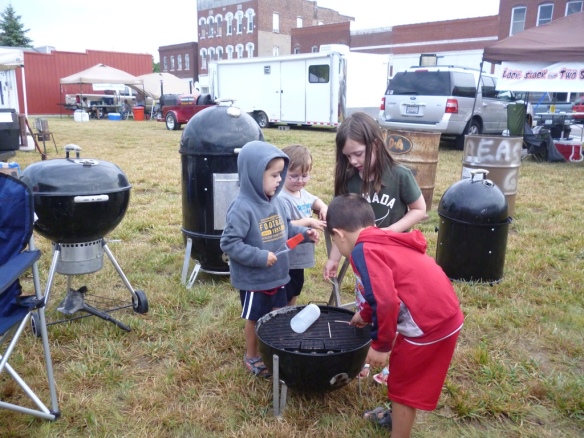 The kids playing ‘Let’s see what we can burn” 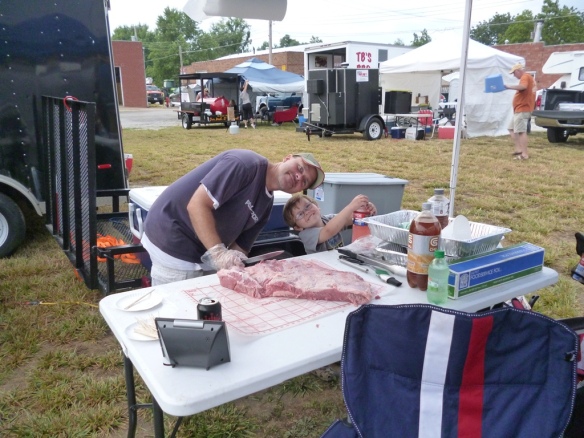 Al and Chase cheesing it up

As the late evening approached, we started on the blind boxes. For the first time, I built a box and it took nearly 2 hours! I have no excuses, it’s embarrassing. 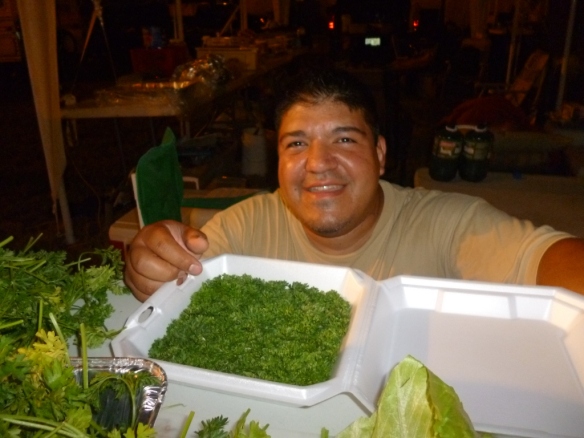 Finally, all the kids went to sleep around midnight, just as the brisket and pork butts were ready to go on the smokers. All night, Al and I tended the smokers while everybody got some shut eye.

I hate the fact that I can only get maybe 2 hours of sleep at every contest, there is too much work to be done overnight and the smokers need constant attention. On the other hand, I’m too anxious to sleep and my adrenaline is running the whole morning and into turn ins. 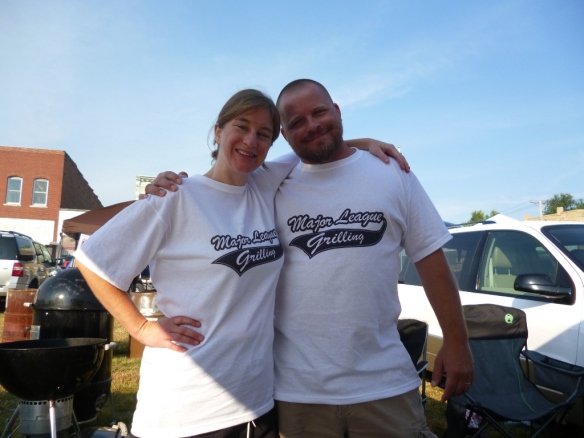 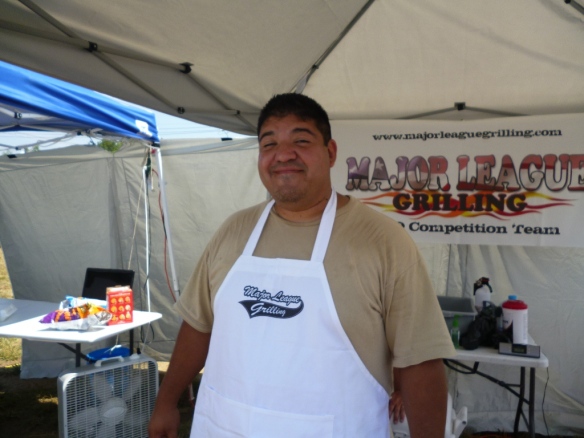 Me, rockin’ the white apron

Before we arrived here, Al and I agreed to switch up our meat responsibilities. He wanted a crack at brisket and I wanted pork. We had hoped this formula would pay off, otherwise we’re heading for an EPIC FAIL moment. Fortunately, our scores were slightly better, but more practice is needed for barbecues largest proteins.

Looking back at our odyssey here in Wellsville, I realized how helpful and well planned the whole event was. The concierge was stellar, with trash service and free ice. There wasn’t a moment I felt uneasy about my surroundings, for once I was relaxed. Lots of gratitude should be directed to the event organizer, Pat Pursifull and the city of Wellsville, they had the red carpet out for all of the pitmasters.

As always, chicken is due at noon. The thighs that Al cooks look phenomenal, but I’ve made this claim before and I wonder why this isn’t consistently in the top ten. 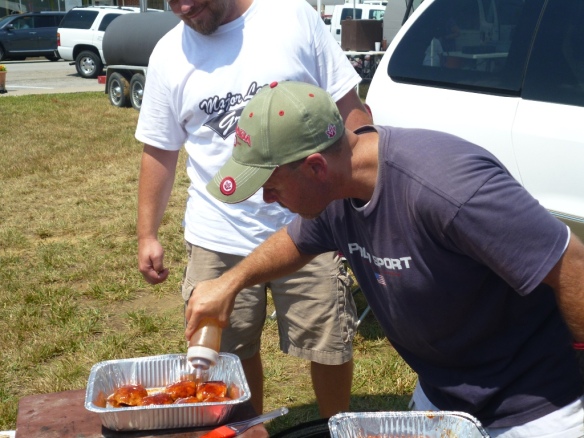 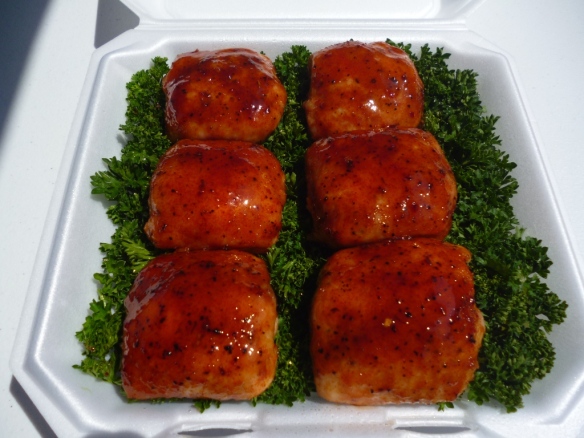 I don’t know how I managed to get 10 ribs in a box, it probably will never happen again. Remember that box that took me 2 hours to build? Here it is, all marked up with sauce from my paws. 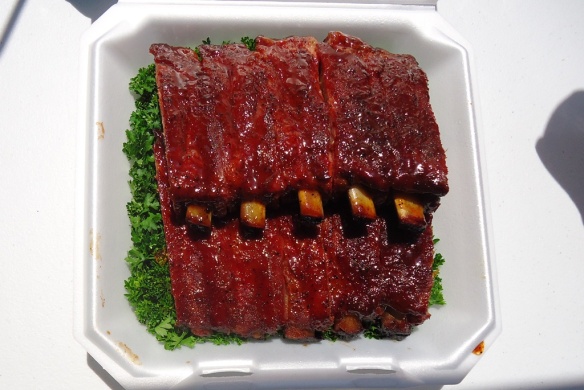 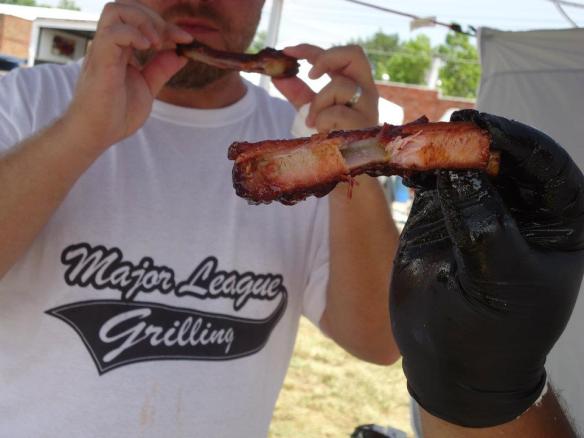 I like the way the ribs turned out. After the 5th place call at Florissant, I didn’t do anything to change that recipe. I just hoped it wasn’t a fluke, we’ve been there before. Nothing is more puzzling than getting a call at one contest, then come in DAL (Dead Ass Last) at the next contest using the same recipe.

My first attempt at pork turn in was not as easy I had planned. Clearly, the pork was undercooked, but not by much. I tried getting cute with cooking 2 money muscles which required 2 whole pork butts. This meant I cooked 3 pork butts altogether because the 3rd pork butt was used for pulling. I have some ideas for next time. 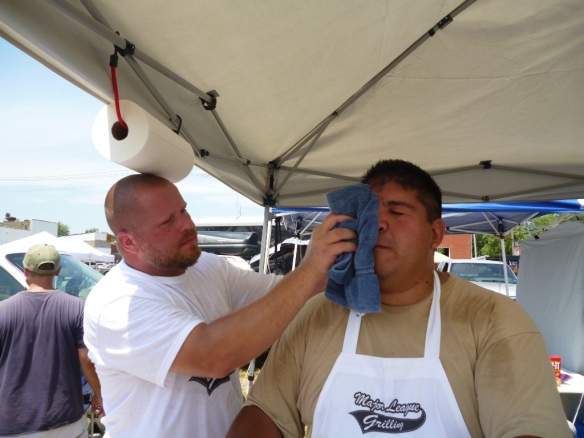 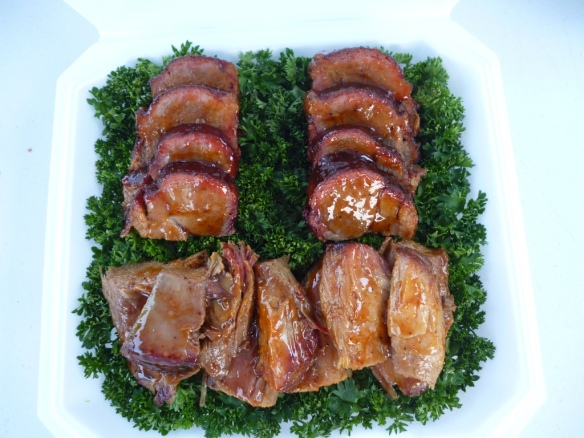 The unforgiving brisket turned out quite tasty. I couldn’t have been happier with the outcome, our highest score yet! 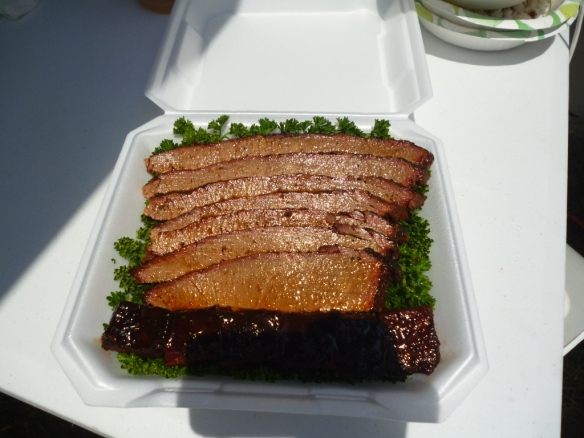 Not that we needed validation for ourselves, we knew we could hang with the guys who had RV’s and trailer pits, but this was a pretty sweet effort by Major League Grilling. Meanwhile, Gilly’s BBQ won Grand Champions and our friends Rippel-Que took reserve GC!

We loved the event here in Wellsville and we talked about coming back again. But I do have a gripe with this competition…it has ruined me. Wellsville has set the bar for the way teams and cooks are pampered. Other event organizers/contests should consider this model as well. Perhaps a volunteer dishwasher for each team?