On this night, I had a violent hankering for some yardbird. Having been tired of making the the rich and sweet competition style BBQ, nothing was stopping me from making my sticky and charred chicken.

First, I fired up the grill for the 2 zone indirect heat. Now I prep the chicken with some BBQ rub. I don’t know what commercial rub I dusted the poultry with…don’t care. The thought of some heavily sauced fowl has clouded my memory!

For 30 minutes, the flavorful pieces of seasoned drums and thighs cooked on the cool side of the grill with the lid on. Afterwards, the topside of the chicken got the first coating of sauce. Ten minutes later, I flipped the chicken and painted the first coat on the bottom side. I repeated this process 2 more times, the chicken started to achieve an appetizing thick glaze. 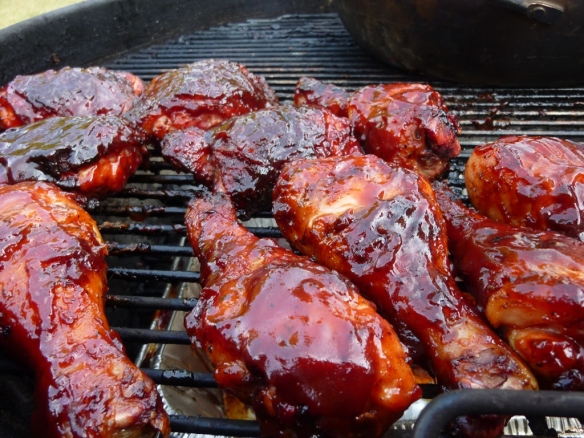 Don’t be mistaken, this is not competition chicken…this is Major League Grilling chicken. Upon getting the meat cooked through, I removed the lid from the kettle. Instantly, the fire began to rapidly build from the rush of oxygen feeding the embers. When my blazing inferno reached the desired level of heat, I placed the chicken over the heat to char them like a piece of burnt toast. The fire was venting a pleasant aroma of sweetness around the grill as a result of the sauce dripping on the coals. If such a scent was ever bottled, it would be called Char-Pollo eau de toilette.

The chicken was seductively sticky, saucy and100% deliciousness. Evidence of this was found on all 10 digits and the surrounding area of my mouth. Finally, the best arrangement possible to enjoy my yardbird is not having to share any of this…check.

One can only take so much sweet tangy BBQ sauce and seasoning, especially when you grill as much as I do. I love to mix up the palette with savory and earthy flavors to shock the taste buds. These STL style spare ribs were calling for something different and I gave it to them. 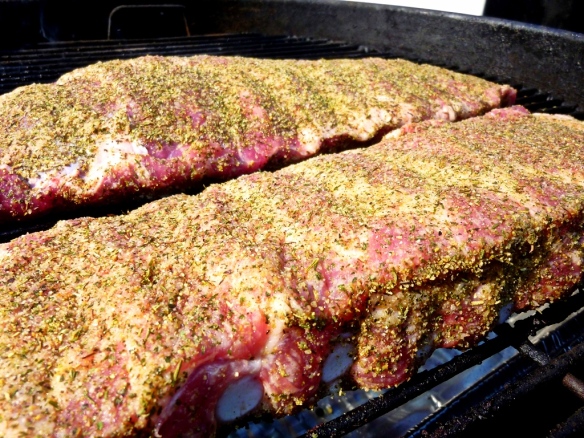 The ribs were dusted with Penzey’s Arizona Dreaming rub. It’s an aromatic rub with oregano and cilantro herbs mixed with southwest spices…and it’s salt free! I fired up the kettle grill for indirect heat…guessing around 400 degrees.

Once the ribs go on, I let them roast on the grill for an hour. Then I wrapped them in heavy duty aluminum foil topped with unsalted butter (these were served to my Grandpa who is on a low sodium diet).  After 60 minutes in the foil wrap, they roasted on the grill for another 30 minutes. Because of the high heat throughout the process, these ribs were falling off the bone in only 2.5 hours!

The family loved these ribs, especially Grandpa. For a guy who only likes to eat cheeseburgers and fried chicken, he chowed down a half rack of these ribs. That’s saying something!

Since MLG has made the jump to KCBS competition, I’ve taken it very seriously. And with the time and effort toward these comps, we have been somewhat successful against the big boys. Unfortunately, that has conflicted with my passion for … Continue reading → 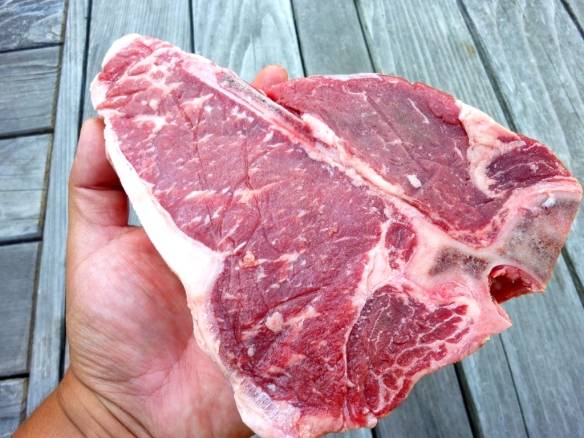 My Dad got me this mammoth 2lb porterhouse steak for Father’s Day. The first thought that came to me was steak and potatoes.

I took a few Yukon gold potatoes and started slicing them to make hasselback taters. The grill was set for indirect grilling at about 400 degrees. When the grill came up to temp, I put some butter on the potatoes and cooked them for an hour. 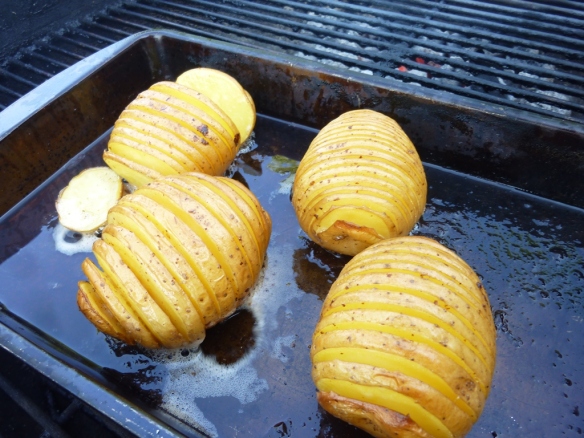 Potatoes on the grill

Then, I mix breadcrumbs and Parmesan cheese together and piled on the potatoes. 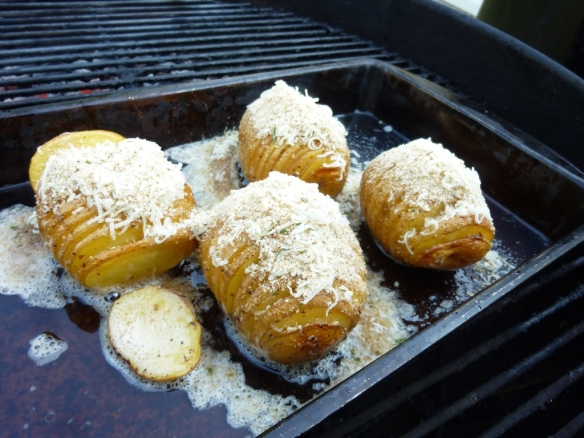 The steak was seasoned simply with canola oil and fresh cracked pepper. 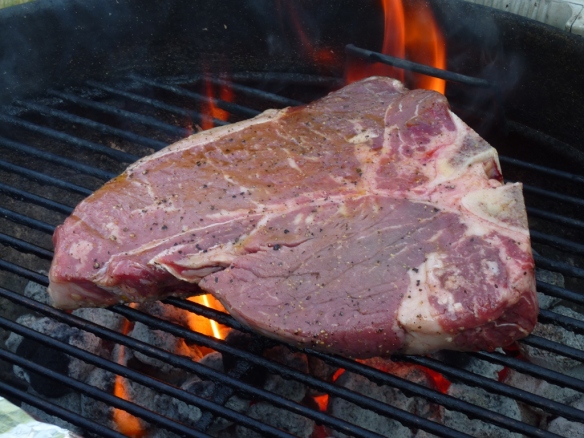 I flipped it once to sear the other side and pulled it off the fire. It cooked until the steak reached an internal temp of 130 degrees.

Plate the steak, topped it with unsalted butter and seasoned with sea salt and more fresh cracked black pepper.

Served my delicious steak with hasselback potatoes and a whole ear of corn…tasty!

There are only a few things you need to make great Q; smoke, rub seasoning and sauce. The last 2 items have an exuberant amount products out on the market that can make an infinite number of flavor profiles. On … Continue reading → 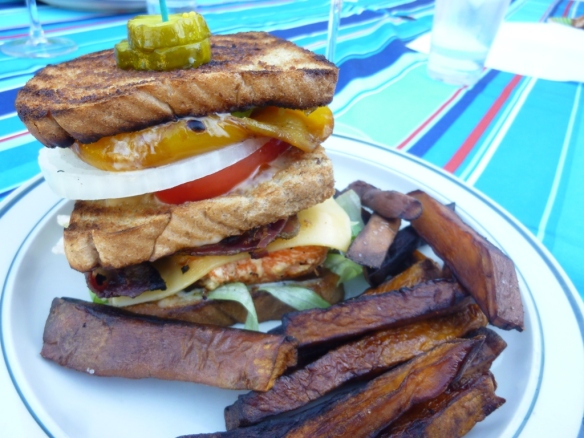 Had a craving for a big sandwich for lunch, decided on this salmon & bacon behemoth! Real simple because I had lots of vegetables and toppings to choose from…I love summer time! First off, I start making the fries by parboiling the cut sweet potatoes for 5 minutes, then pan fry in vegetable oil. 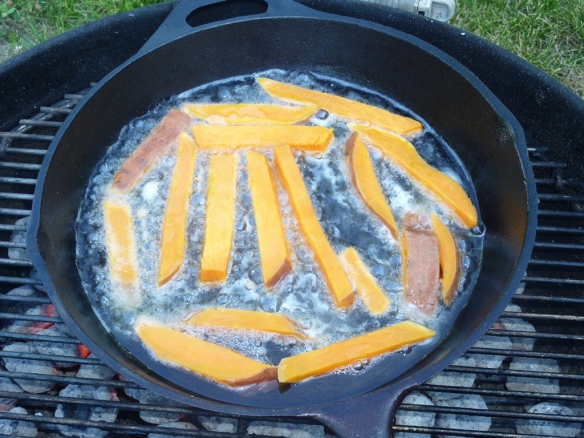 Every club sandwich requires bacon, I cooked the meat candy on the grill until the edges looked crispy over direct heat. 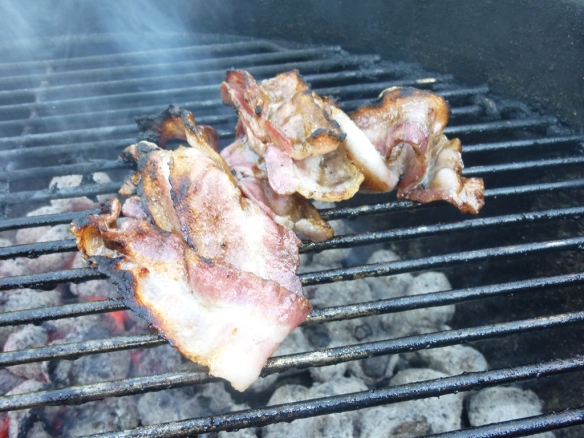 Next, I lightly seasoned the wild Alaskan salmon with some Penzey’s rub and cooked until the fish starts to flake. 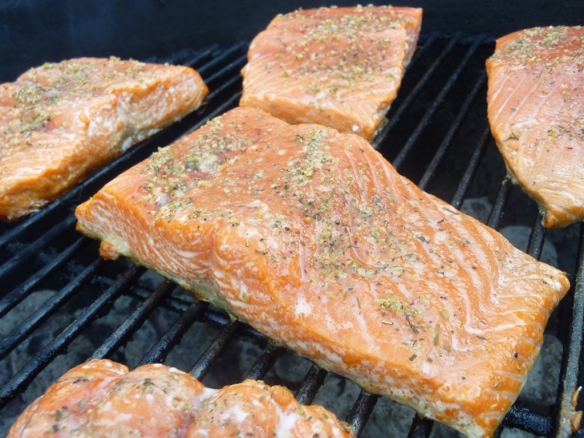 Salmon on the grill

Once those are all done, I started piling on the toppings:

Assemble all of the above and serve with the sweet potato fries. 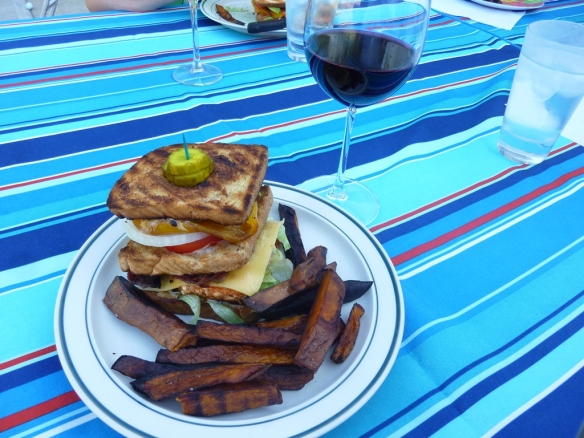 Lunch with a glass of CAB

This monster club gets a monster bite, followed by a monster mess. 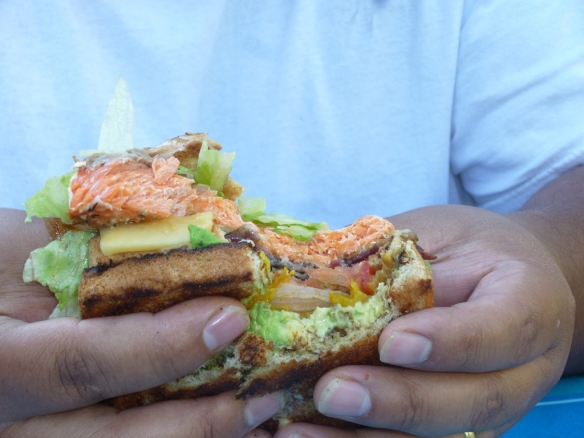 No doubt, this is one of the best sandwiches I ever made.