I originally wanted to call this post “Meatfest”, but that would invite crude double connotations from the juvenile visitors to this site, “football party” is more appropriate. Nonetheless, meat was heavily on the menu for Sunday, football gameday. The rundown for this epic grilling jam session included tasty treats from Major League Grilling:

Our host, the Original GrillinFool, Scott Thomas and author of GrillinFools.com staged a smorgasbord of taste test recipes and savory cuts of meats that included:

Yes, an unnecessarily amount of carcass to grill. We consumed the about 1% of Missouri’s farm industry at this party.

So while the grills fired up, all of the attendants reached inside their ice filled cooler (almost in synchronization) to discharge a cool bottle of fermented barley and hops, then turn towards the flat screen TV placed outside to watch the hometown gridiron match up. 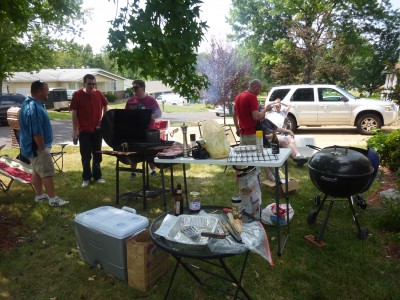 First to go on 1 of the 3 grills is my blueberry muffin fatty and meatloaf in a bacon weave. These were prepped the night before, so all I had to do was unwrap and place them on the grill. They will be done in a couple of hours.

Meanwhile, Scott got the grill hot enough to start the steaks. The steaks were re-donk-u-lous!…at least an inch thick!

He gave us a choice between flavoring our steaks with Andria’s steak sauce or Walkerswood Jerk sauce. I chose the Jerk sauce, I love a little kick.

My jerk steak is second from the right

I made my first party foul…no pictures of my steak or grilled romaine salad…doh! It was excellent! I just couldn’t stop eating to take a picture.

After about an hour of smoking in the kettle, the fatty is done.

The fatty rests until everyone recovers from the NY strip steak coma. I brushed on a little bit of BBQ sauce and slice up some servings…ready to eat!

The second party foul of the day, by yours truly, happened when I dropped a slice of fatty…doh! 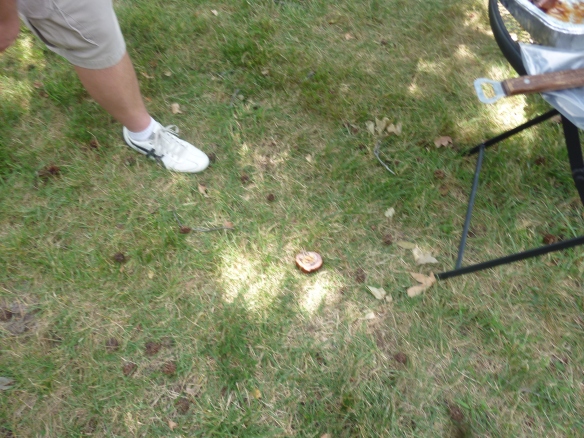 Shane offers to step up and throw it away…or did he? I can neither confirm or deny.

In between all the grillin and chillin, there was some major league thrillin in all the football games. Sadly, our hometown team, the Rams didn’t fare so well. We live to watch another day…let the grilling commence!

Roy is enjoying his cabernet sauvignon

The next helping of succulent barbecue to devour was the smoked meatloaf. It was an x-tra large 2lbs of ground beef…plus a 1lb of bacon, herbs, spices and other flavorful ingredients. 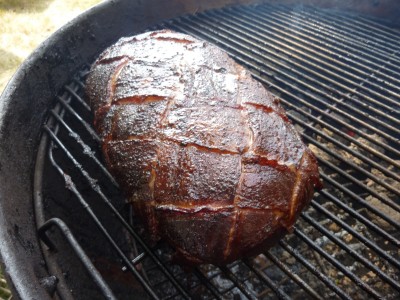 I gave the crispy smoke infused bacon weave a glaze coating of BBQ sauce and served it in slices.It was outstanding and all the guests were on the verge of slipping into a coma, but we were only halfway done! 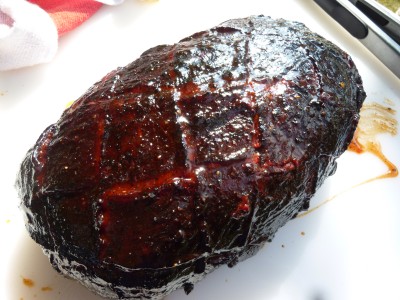 While the rest of us were either unconscious from the BBQ binge or in a drunken stupor, Scott was preparing the ribs. He pulls out 6 racks of baby backs that were soaking in a apple cider brine and laid them on the portable table outside. He then coated the ribs with his famous pumpkin spiced rub. However,  one of the racks of ribs were slathered with the jerk sauce…I liked the thought of that. Once the grills reached the desired temperature, the ribs were loaded on the cookers.

During this downtime from eating, it gave us the opportunity for us to talk about important things like the progress our fantasy football teams and unveiling a little bit of my grilling secrets. They’re not really secrets, I share everything I know (which is not much) with anyone who is interested.

The smoke from the cookers carried a delightful hint of pumpkin spice around the yard. After a couple of hours of anxiously waiting, the call for ribs were building. Finally, once the ribs showed the proper amount of meat pulled back from the bone, they were ready to be served.

No sauce necessary for these juicy ribs, they had all the flavor it needed from the rub and smoke. I’ve had these pumpkin ribs before, they are delicious! Scott then gave me some ribs with the jerk sauce, just as tasty but completely different. The combination of the heat and spices like peppers and cloves takes pork to another level.

Jerk rib in front, pumpkin spiced ribs in back 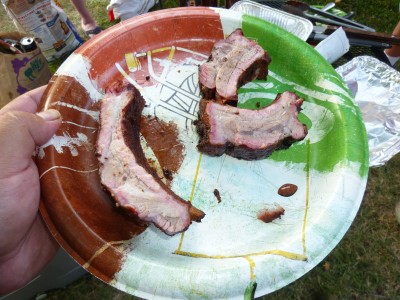 If that wasn’t enough meat to stretch your pants out, Scott threw 2 pork tenderloins on the grill. By this time, I was done and the guys started to leave to return to their wives, significant others and kids.

I had a great time hanging with everyone there and sharing some great BBQ, I hope we do it again. I’m glad that everyone was satisfied with my meat in their mouths.